Peep and the Big Wide World Wiki
Register
Don't have an account?
Sign In
Advertisement
in: Articles with incomplete sections, Characters, Antagonists,
and 2 more

Tom is a main character in Peep and the Big Wide World and serves as an antagonist.

Tom has four ticklish feet, a tail, and triangle shaped ears. Most of Tom's fur is blue with the exception of his back that has three triangle shaped black stripes on it. Tom has a pink nose with black whiskers coming from it and his eyes are oval shaped and white with black pupils. Like his pupils, the inside of Tom's ears are black and also his body is surrounded by a black outline. Tom's claws are retractable and shown as thin and black. His feet usually have either four toes, three, or none.

Tom is gullible and a trickster. He often tries anything he can to physically harm or scare who he doesn't like, get them into trouble, or, to a lesser extent, try to eat them.

Tom is very sly and loves telling people what to do and will use them to get what he wants.

Tom first appeared in episode two of the 1988 version of Peep and the Big Wide World and appears as a kitten . Sometimes during the film Tom will stand up on his hind legs. He was first found by Peep playing in a bag and managed to get Peep to tell him who he was and about Peep's friends. Tom deceived Peep into making Peep think he liked birds as friends but numerous facts tell that he had intended to eat or harm them.

Tom used a log to be used as a boat to get to green island and made Peep be the navigator for the log, Quack the outboard motor, and he himself was the skipper. When Chirp accidentally landed on the log Tom tried to chase Chirp which resulted in the log being turned over and both of them swimming to shore to dry off.

Chirp told Tom that allot of birds were at the top of the tree and Tom climbed up the tree. Tom was left on green island and was last seen there swatting at a pink butterfly he had near the tree.

Tom is a kitten in the TV series of Peep and the Big Wide World. He met Peep shortly after Peep was born when Peep attempted to warn Tom about a cat being nearby. Tom often acts harshly toward Peep, Chirp, and Quack and often tries to deceive them, get them into trouble, or intimidate them. Tom has shown intelligence throughout the show but sometimes he has been shown easily deceived. Tom posses the ability to slink around quietly and climb up trees.

This section is incomplete. You can help this wiki by adding missing info.

That's a Cat was mainly a conversation between Peep and Tom, where Peep refutes all claims made by Tom saying that he was a cat. 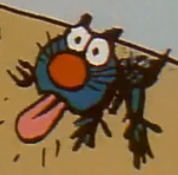 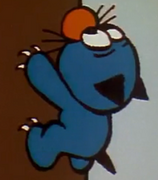 Tom climbing; his fingers and toes

Tom's foot print in the snow; has four toes instead of none

Community content is available under CC-BY-SA unless otherwise noted.
Advertisement