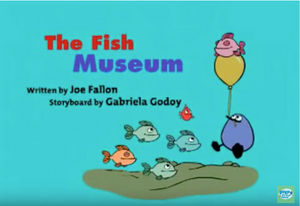 The Fish Museum is the 17th episode of the first season along with Peep's Night Out. It aired in 2004.

Ever sense Quack met the fish living in his pond they became good neighbors. One day, Quack told the fish about everything on land, Fish Jr. liked them and wanted to go on land and see the wonderful things. But the orange fish told her she could not because fish can't live outside the water. He and the other fish wanted to go on land too but they can't. Fish Jr. felt sad she could not go on land and Quack felt sorry for her. Just then Fish Jr. had an idea she asked Quack if he could put things in the pond for her and the fish to see, And Quack agreed,(It's the least a duck can do.)

He left his pond and grabbed a branch, He asked Peep and Chirp if it was good for the fish, and Peep said yes. Quack threw the branch into the pond and it sank to the bottom. He collected other things, like a sneaker, a book, a bowling ball, a bicycle, a potato, an apple, a sponge, and a marble. He going to take Nellie's bowl but he decided not to.(Possibly remembering Nellie getting mad at him and banishing him from her yard the last time he was in her bowl in Shadow Play) Then he threw all the things he collected into the pond and they sank to the bottom. (Despite that the apple floated) The sponge floated at first but filled with water and sank. Fish Jr. decided to keep all the things and start a museum called: "The Fish Museum of things from up there."

Quack told her if it was a museum it has too have an acorn. He jumped out of the pond and grabbed an acorn and pulled it underwater. But while he and Fish Jr. were looking for a place to put it, It floated towards the surface but Fish Jr. grabbed it and put it in a shell to prevent from floating. Later, Quack decided to give Peep a sneak peek of the museum before it opens to the public, Peep ducked his head underwater and met Fish Jr. and saw the museum, At Fish Jr. thought Peep was for the museum before Quack told her he wasn't.

Soon, the Fish Museum was finished and ready to open tomorrow. Quack told Fish Jr. the museum was missing one more thing: Balloons! Every grand opening has them. Quack stole a balloon from a birthday party and brought it back to the pond, It could not sink so Quack pulled it underwater and Fish Jr. loved it. Quack tried to attach it to the start of the museum but it floated towards the surface, Fish Jr. tried to get it but it launched her out of the pond and into the sky were she saw the world outside the pond, She landed in the pond and told Quack she saw it. Quack was unable to attach the balloon to the start of the museum, so he held it.

The next day, the museum opened to the public. And the fish were amazed by all the exhibits. But Quack and the balloon was the most popular exhibit. The fish took turns being launched out of the pond with the balloon to see the world outside the pond and land back in the water. Peep and Chirp saw this, But Chirp decided to let it remain a mystery.

Retrieved from "https://peepandthebigwideworld.fandom.com/wiki/The_Fish_Museum?oldid=7712"
Community content is available under CC-BY-SA unless otherwise noted.