Squeak has a oval shaped light pink body that is surrounded by a black outline. Squeak has two triangle shaped ears on the top of her head that are a darker shade of pink and are also surrounded by a black outline. Squeak has a long, thing black tail coming from her back and a cylindrical black nose on her face. Also on Squeak's face, a short distance from her nose, are several black lines that suggest whiskers.

Squeak is very alert and is a worrywart (a fact she if admits herself). She even acts hypocritical sometimes as seen in the episode All Fall Down where she goes out to look for nuts despite agreeing that it was dangerous to go out.

Squeak first appear in the episode Quack's Tracks and lives in a hole in the ground which is covered by a brick. She always comes up when she hears or sees something dangerous. She really dislikes leaves and often has Peep, Quack, and Chirp remove them. When Squeak walks she goes onto all fours and crawls across the ground with her tail twitching. Squeak is afraid of Hoot and will often hide behind things to avoid Hoot's sight.

Squak's foot prints in the snow

Squeak in the deep dark woods 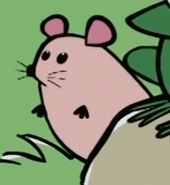 squeak behind a rock
Add a photo to this gallery

Retrieved from "https://peepandthebigwideworld.fandom.com/wiki/Squeak?oldid=8005"
Community content is available under CC-BY-SA unless otherwise noted.