Small flower is a interactive object in the show Peep and the Big Wide World and the focal object of the episode Springy Thingy.

The small flower, in its first stage has a black stalk with two thin triangular leaves. The leaves are light green with a black outline surrounding it. The top of the flower is a pinkish purple and has a black outline surrounding it. Three petals are visible from the top and are oval shaped and pushed close together so that they resemble the head of a tulip.

When the small flower has been crushed it is completely flat except where the flower is rooted in the ground. The petals of the flower are a dark purple and remain in the exact position they were when the flower was upright except the petal on the far right is slightly tilted to the side.

The leaves of the flower is a dark green and much thicker and longer then it was in its second stage. The stalk of the flower, instead of being black like in its previous stages, is dark green like its leaves. The yellow center of flower is not visible when it is crushed.

The small flower appeared in the episode Spring Thing and was first found by Peep. Peep, Quack, and Chirp began to help the flower grow by watering it, guarding it, and protecting it among others things. After some time the flower began to grow larger. One night, while Quack, was guarding the flower at night, he fell asleep and accidentally fell into the enclosed area where the flower was, crushing it. Peep briefly mourned over the flower as he and his friends believed it to be the last living thing.

Peep raking the soil next to the flower

The flower being watered 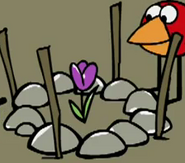 The flower still at its smallest stage in its enclosed area

The flower in its second stage

The flower in it second stage in the enclosed area

The crushed flower
Add a photo to this gallery

Retrieved from "https://peepandthebigwideworld.fandom.com/wiki/Small_flower?oldid=7503"
Community content is available under CC-BY-SA unless otherwise noted.