The rock is an interactive object in Peep and the Big Wide World and also the focal object of the episode Quack and the Very Big Rock.

The rock is roughly spherical with a partially bumpy surface and is grey coloured with a black outline stretching around it. As compared to the size of humans, the rock is of a medium size a little wider than a human's foot while in contrast to the animals of Peep and the Big Wide World, the rock is a small boulder.

The rock appeared in the episode Quack and the Very Big Rock and was originally found in a rock pile in the playground. Some children came to the playground after supper and began to play on the rock pile which resulted in the rock being dislodged and rolling down a hill. After hitting a small stone, the rock was sent a short distance into the air before hitting the ground again and remaining stationary. The next morning the rock was encountered by Quack after he bumped into it absentmindedly. The duck proceeds to ask the rock to move eventually ending his demand in an angry shout. Due to the rock being unyielding, Quack heads down the hill angrily just as Peep appears, observes the rock briefly, then walks around it and down the hill. Peep later persuades Quack to go back to the rock and move it, later making the deduction that it needs to be pushed. After a few failed attempts at pushing the rock by brute force alone, Peep runs down the hill towards it but to no avail.

Later on Chirp appears and, after a conversation with Quack, decides to help move the rock by resorting to getting help. Chirp returns with several animals who eventually decide to push together at first up the hill and then sideways, but are unsuccessful. Peep then decides the rock should be pushed down the hill and, after Quack specifies where the rock should be placed, the animals begin to push the rock downwards. The rock begins to move under the force of the animals and soon dislodges, with Quack on top, to roll down the hill quickly. The rock hits a stone subsequently sending both the duck and it into the air. The rock eventually rolls into Quack's pond, much to Quack's disapproval, and splashes Quack as it comes to rest near the bank. The rock is last seen having taken up residence in Quack's pond and being used by the duck as a back-scratcher.

The rock while it was in a rock pile

The rock rolling down a hill at night

The rock lodged in a hill

The rock in Quack's pond 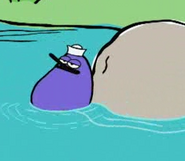 Quack using the rock as a back-scratcher

Quack on top of the rock
Add a photo to this gallery
Retrieved from "https://peepandthebigwideworld.fandom.com/wiki/Rock_(focal_object)?oldid=5925"
Community content is available under CC-BY-SA unless otherwise noted.