Rabbits also referred to as bunnies, or pink rabbit, purple rabbit, and brown rabbit in all caps by the closed captions and credited as Hopping Bunny #1, Hopping Bunny #2, and Hopping Bunny #3, are one-time characters in the show Peep and the Big Wide World appearing in episodes such as Peep in Rabbitland.

The brown rabbit is the exactly the same as the pink rabbit except lacking a bucktooth and having pale orange fur, a pink nose, and a red bobbed puffy tail.

The purple rabbits is the same shape as both the pink rabbit and the brown rabbit and like them its body is surrounded by a black outline. The purple rabbit has purplish grey fur over its entire body except for on its chin and around its right eye where the fur their is light grey. On the purple rabbit's rear is a puffy bobbed tail that is darker shade of light grey.

The three rabbits are curious and afraid of anything they do not know but become friendly quickly with any creature they recognize isn't going to harm them. The three rabbits are very afraid of dogs to the point where they will instantly flee in terror at the sound of a dog's bark (regardless if the dog is known not to hurt rabbits). When sleeping, the bunnies will snore and fidget. The three bunnies have been shown having a fondness for vegetables which they will quickly devour.

Pink, brown, and purple rabbits appear in the episode Peep in Rabbitland, first appearing in the start up for the episode. The three rabbits live deep in the rabbit tunnels where Peep accidentally found them by falling through a hole in the ceiling. In the episode Peep in Rabbitland, the rabbits at first suspect Peep as a threat and quickly hid from him but, after discovering he wasn't a threat (or rather a dog), became more friendly. The rabbits later found uses for Peep as a back scratcher, bunny hurdle, and look out. The rabbits were then seen returning Peep above ground. 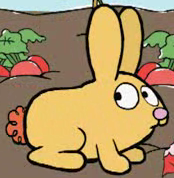 The brown rabbit in a scared position after hearing Nellie's bark

The three rabbits searching the outside for danger

Retrieved from "https://peepandthebigwideworld.fandom.com/wiki/Rabbits_(Peep_in_Rabbitland)?oldid=6139"
Community content is available under CC-BY-SA unless otherwise noted.