For the episode see Peep's Can (episode)

Peep's can is a location in Peep and the Big Wide World.

Peep's Can is cylindrical with the can's grey lid lifted up above the entrance. The front and back of the can have a grey rim with the space between the can being dark blue. A light blue rectangular patch is placed in the middle of the can near the top that, though in most episodes is plain, originally depicted half of a green bean's pod with three round beans of the same shade placed on it. The inside of Peep's can is dark grey with curved walls and a flat back.

Peep's Can first appeared in the episode Spring Thing and is the home of Peep. As seen in the episode Peep's Can, Peep found his can while he was looking for a home on a windy night. A recurring gag revolving around Peep's can is that Peep, Chirp, and Quack will go into it all at once and will end up in a very uncomfortable position and have to force there way out. Quack is often the case of most discomfort in the can as he often forces himself in which results in the other person inside the can (mostly Peep) being squished. Frequently Peep and Chirp are seen inside the can often talking together.

Peep's can in winter

Peep's can with green beans on it

The inside of Peep's can 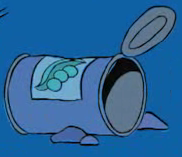 Peep's can at night

peeps can in foggy weather
Add a photo to this gallery

Retrieved from "https://peepandthebigwideworld.fandom.com/wiki/Peep%27s_can_(location)?oldid=7601"
Community content is available under CC-BY-SA unless otherwise noted.