Newton is a main character in the show Peep and the Big Wide World.

Newton has a large shell over his back from which his legs, head, and tail, stick out of the openings in his shell. All of Newton's skin is dark green with his four stubby legs coming from the bottom of the shell, his pointed tail at the back, and his head at the front. Newton's head is oval-shaped with a slightly pointed mouth and his head is attached to a long neck. Newton's eyes are oval shaped with black pupils and are placed half on his head and half on the individual bumps that extend from his head. Lastly, Newton's shell is yellow on the top and dark brown and divided into sections on the bottom.

Newton is believed to be the oldest animal in Peep and the Big Wide World and, as such, posses some elderly traits. Newton takes things slowly both in speech and movement which, on some occasions, leads to the annoyance of characters or predictability. Despite these traits, Newton has also been shown persisting in meeting new things such as in Newton's Big Adventure where he went out to explore and Meeting Half-way where he set out to meet Willow. Newton is often seen sleeping under his crabapple tree and is not bothered when apples fall on his head.

Newton made his debut in Springy Thingy but was unnamed and appeared only at the end. Newton lives under a crabapple tree which he knew since it was a sapling. When Newton walks, he walks very slowly even if he urgently wants to go somewhere which is due to the weight of the shell on his back. Newton is frequently seen sleeping and getting hit by the apples that fall from his crabapple tree and has been shown eating them. Because of Newton having lived for so long, sometimes Peep, Chirp, and Quack will ask him for advice. Newton is shown possessing the ability to swim and propel himself through water with the aid of his legs. Newton can retract into his shell which he often does when apples are falling off his tree, or when he is sleeping.

This section is incomplete. You can help this wiki by adding missing info.

In the morning, Newton is shown under his tree sleeping. An apple falls from the tree and hits Newton, waking him up, and causing him to move away to another area under the tree. As Newton is just getting back to sleep, another apple falls out of the tree and he sleepily gets up and sits elsewhere. Another apple falls but this time it doesn't hit causing the turtle to smile slightly in amusement only for another apple to fall on his head. Newton gets up and rubs his head and suddenly Peep and Quack appear running to his tree with Peep calling out for him. The two birds tell of their adventures and ask him what he did.

Newton then tells of how an apple fell on him and another apple did with Quack impatiently cutting him off the third time guessing that an apple fell on him again. Peep then suggests that Newton comes to have adventures with them with Newton remarking about how he doesn't move as fast as the birds and Quack hastily agreeing and dragging Peep away. Peep calls out that Newton is still invited and Newton thinks that he may be missing something when he watched Peep and Quack.

Newton decides it is time he had some adventures of his own and he sets out from his tree. While walking along, the narrator remarks that Newton thought of all the things he never saw before, causing the turtle to point out the contradiction and the narrator to point out how Newton will not see anything unless he moves. Newton discovers dandelions, which he calls his "first discovery", and walks up to a dandelion that is in seed and sneezes. The dandelion disperses and Newton, in awe, follows it only to suddenly fall into a pool of water. Newton begins to panic at first and splash around but then calms down, spots a tree branch, and uses it as a kickboard to get himself to shore.

Noticing a sloshing sound coming from the inside of his shell, Newton stands up a bit to empty the water trapped in his shell and then moves on, still after the dandelion's seed. Newton manages to pin down a dandelion seed and then steps off it as he notices a cracker box. A gust of wind blows the seed into the cracker box and Newton goes after it, but first makes sure it is safe by testing the top flap with his head. Satisfied that the flap will remain in place, Newton ventures into the cracker box remarking, as crumbs stick to his feet, that it is "crumby". As Newton finds the dandelion and grabs it with his mouth, he rejoices over catching the seed despite his slowness. Newton feels the cracker box is "spooky" and suddenly, a gust of wind blows the flap of the cracker box down, trapping Newton. Newton walks to the end of the cracker box and, through a gap in the flaps of the back wall, sees outside and decides that is where he wishes to be.

After some thinking, Newton starts to force his head against the back wall of the box. After several attempts and great effort, the flaps of the box open sending Newton flying out into the air and quickly retracting into his shell. Newton lands and where he does he sees some ants and, after noticing one of them looking for food, talks to them. The ant instead assumes that Newton's voice comes from a nearby pebble and Newton withdraws himself from his shell and makes himself known to the ant. The ant is startled by Newton's appearance and Newton explains he is a turtle and then offers the ant the crumbs from the cracker box that stuck to his feet. The ant accepts and calls the other ants over who begin to eat the crumbs.

The ants thank Newton and Newton tells them of the cracker box having more crumbs. The first ant Newton met compliments him and states that Newton must have had amazing adventurers which causes Newton to blush and tell that he is having amazing adventures now, only to realize that ant has moved and is now over at the cracker box. The ant thanks Newton again but calls him a "giant pebble thing" prompting Newton to call after it that he is a turtle. Watching the ants, Newton realizes the lateness of the day and decides to go back fearing that if darkness comes, he may not be able to get to his home again. Newton doesn't know where home is but, after straining his neck, he sees his home and quickly heads towards it. Newton, somewhat tiredly, reaches his home and sits down before retracting into his shell. Newton is last seen sleeping and mentioned to be dreaming of the adventures that happened in his day. 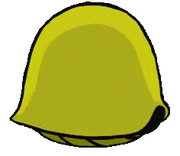 Newton when fully retracted into his shell 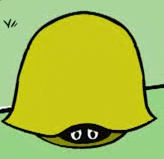 Newton peering out of his shell

Newton sleeping inside his shell 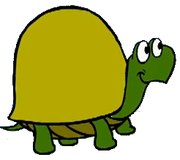 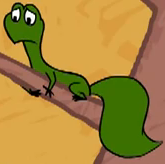 Newton as a squirrel in the episode Trading Places

Chirp on top of Newton 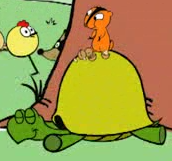 Add a photo to this gallery

Retrieved from "https://peepandthebigwideworld.fandom.com/wiki/Newton?oldid=7916"
Community content is available under CC-BY-SA unless otherwise noted.